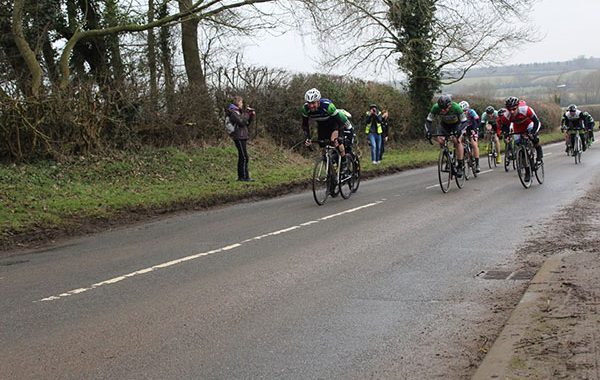 With the sad closure of Wellingborough cycles, many loose threads were left hanging, one of them being our hosting of the NCRA Handicap at Old. James Hyde stepped up and took on responsibility as race organizer.  He was not short of offers of help and as usual we all pulled together to ensure marshalling duties, cars, signs, potholes, teas/coffees/cakes and signing on was all covered!

From an organizers point of view the race went brilliantly with no issues and the team working well together. All the riders also reported a good race with no incidents, which is great to hear, so well done to James and the team! Also a huge thanks to the race officials, as without them there would be no racing.

On to the race itself! We entered a strong team of 3rd & 4th cats as follows:

Our riders were spread throughout the first few groups and all worked hard to close in on the groups ahead.  As the first group on the road began to fall apart, Luke Frost went clear and led the race on his own for a long period. As the race approached the final stages, the 2nd group on the road containing around 15 riders, closed in on the solo leader.

Coming over the crest of the final rise before the fast run in to the finish Frost still held a slender lead of a few seconds and he almost made it stick! The group finally caught him on the fast run to home and it was our very own new boy Danny Metherall who took his first win in the sprint. Luke Frost held on for an impressive 4th spot having lead solo for so long.

All in all everyone finished safely and enjoyed the event!

We are very proud to report that the VeloElite teams…