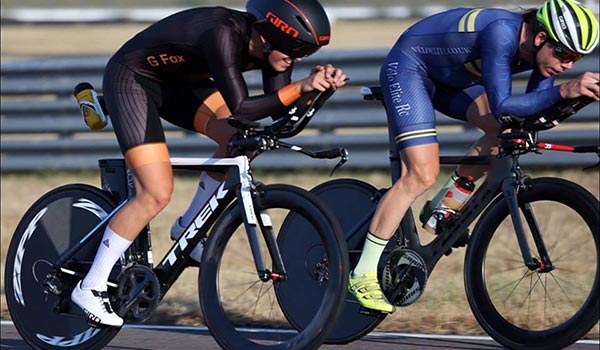 So as 2018 got underway with a shockingly turbulent start, but still, the biggest question on everyone’s lips was, who would win the sweep stake on Stu Plows early season crash?

Tired of being the butt of these cheap jokes, professional wedding guest Plows really showed us all by simply selling his bike and retiring to Cafe Ventoux with long term partner Stoo Travis and third wheels  played by one of: Mike Cowland, Tom Medley and the ever interchangeable Greasley brothers.   Stu achieved an impressive early season sub 22minute PB for 10miles and rode up the actual Mount Ventoux! Hopefully we will convince him to return to riding his bike fast in 2019!

Fabos had been slowly building his form throughout the season and had really built up a reputation as one of the best up and coming testers around. He set some incredible times for both 10 and 25miles, winning a number of club events and competing with the best at open TT’s. His new found success has seen the rise of his official fan club the Fabettes, but Fabos was determined to stay grounded (literally) and keep to his plan that has allowed him to get this far.

In a moment of pure ‘Fabosness’ his biggest success was reclaiming the chopper of the year award as he caught his chain in his front mech and gloriously slid along his face, breaking his hand for good measure. As you would expect he held perfect aero positioning throughout the crash, a man at the peak of his powers. We caught up with the great man for a quick chat:

So, Fabos, it’s been great season for you, what was your personal highlight?

I really really liked the hire car we had on the training camp in Majorca,  I wanted to spend as much time in it as possible.  (Ask Fabos for full story)

Back to the bike Fabos, what was your seasons highlight?

Meeting all my fans and confirming I am the real deal and did go under 30mins at Grafton Underwood, they are so great!

Who would you say is your biggest influence?

Oh, without a doubt Evel Knievel

What are your thoughts on the move from old HQ to new HQ?

It was about time, the old HQ was Veganist, so I orchestrated the move away from Nene Court and we now spend our dirty, wet, stinking cyclists money at new HQ, its fab!

What’s a fact nobody would know about you?

I tell everyone I am 42, I am actually 63, I owe my youthful looks to a melon and rose petal face mask.

Quote of the year from Fabos.. “my back hurts”

Should be 2nd Cat, Gary has had a fantastic season, getting stronger each week, his positive approach to riding mixed with endurance on the bike led to some fantastic TT results. He has set a number of PBs on the local TTs with some great efforts, although it had been noted he could probably have saved a little more time by ditching the white gloves, glow bands and whistle. VeloElite.co.uk has the inside scoop on some gossip surrounding Gary. It has been speculated that Gary has a bit of a crush on fellow rider Caroline. Although at the moment unconfirmed, we will be keeping an eye on them both. We will be referring to them in future as Garoline. Let’s hope this doesn’t impact to hard on Gary’s new boy toy George Fox.

In possibly the biggest turn of events, we have had our first full time rider within the club. After being enrolled in the fire service since birth, Mark Ainge has finally ditched his supersuit and donned his veloelite skinsuit as he “retired” in order to pursue his goal to become a pro. He has achieved some great results in the 45s TT handicap competitions and is representing the club for the CX season. Since taking up his full time role, Mark has already set one world record for the most overdressed man to complete a bike fit … Ever.

Steve Henman hasn’t been racing much this year as his personal relationship continues to blossom. It really is fantastic to see two people continue to build such a close and beautiful relationship through the club, using cycling as a tool to strengthen themselves and their growing love. You can see from the way they look at each other that this relationship is one that is going from strength to strength. Henman and Hardy, what a couple.  Henman dragged himself around Salcey a few times, setting a PB each time, ironically he seems completely inept at setting an alarm clock!

Steve’s quote of the year: “I would prefer it if Paul and I could be referred to as Hendy”

Professional George Fox tribute act and the clubs official ‘head of junk miles’  has, as always outdone himself this year. Jacks Patmore’s incredible performances on his TT bike have seen his profile rise considerably on the scene and led to him to him winning the impressive title of ‘Great Doddington commuter of the year’. A neighbour said “Jack is such a nice boy and much loved in the village”. Jack has focused his efforts on TT’s this year and has put in some incredible rides, including 3rd to World Tour Pro Harry Tanfield, with Jack putting in a superb 19.05 on the 10mile course. This was backed up with another sub 20minute ride and several podiums. He’s also picked up a great 2nd at Rocko, one of the first in the new club colours!

Jack’s quote of the year: “I taught Fabos everything he knows about deploying the face brake mid crash, another option is the tooth anchor but I’m yet to teach him that one”.

Little known facts about Jack: His race bike is officially 43% duct tape.  He holds the club record for the most time wasted on a Saturday sitting in a cafe. He has a bad boy reputation on the local club TT scene, proof you can take the lad outta Welly but….

Caroline has had a good year, with an excellent ride in the Rockingham TT and PBs on all the courses ridden! She noticed early on that there was a lack of “chicks” on the local TT scene. So Caroline, always up for a challenge, set about encouraging more ladies to join in, Jo, Lisa, Robin, Gary and Steve, all stepped up!

Interesting fact about Caroline: she has a marigold/rubber and cleaning fetish. She has a secret cycling crush on VeloElite bad boy Gary. #garoline

Lisa Brady has been growing in confidence throughout the season and has been improving almost every time she has raced. Lisa posted a very respectable 7.32 time on the RFW 2.8 mile dash where she also beat fellow “Chick” Jodie Redden by 2 seconds. Lisa has really pushed forward with the Velo Elite “care in the community” programme. Within her work, Lisa has assumed immediate responsibility for Steve Henman – even offering to travel to and from races together.

Lisa was heard saying: “we are called “the chicks” makes us sound bloody ridiculous. I thought we should have been called the badass bitches, but oh no no, Caroline knows best”. She followed up with: “Colnagos are crap”. ermmm ok then…

VeloElite new girl and female ginger captain Jo, has jumped right into the local TT scene along with the “chicks”.  Jo has had a blast riding the local TTs with some solid results, most notably at the Rockingham TT and around the 45s course at Salcey! We did sit down with Jo for an interview, but having asked only 1 question, we called it a day 2 hours into her answer, we couldn’t get  a word in, the final straw came when she stripped down to her bra, I suppose we should of expected it from a Rushden chick.  We are hopeful Jo will hit the real racing next season with some Crits!

VeloElite Road Racers Review 2018: We have a good number…

Friends of the Club We are very lucky at VeloElite…